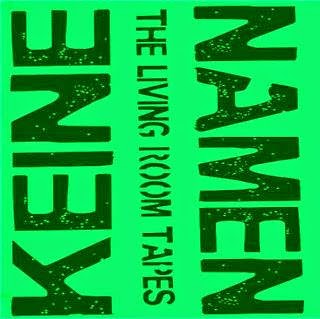 Something akin to a lost fragment of the Rosetta Stone of DIY Punk.Three chord thrash re-animated as Zero note dirges, or rather a case of playing the right wrong notes. Diametrically opposite to Rick Wakemans' Tales of King Arthur concept album.The only concept of this album is ,'Lets do it 'cus we can', or can't,if one is refering to musicianly abilities.
Imagine the bastard offspring of Half Japanese, The Shaggs, and The Prats, and you'd be half way there. True Year Zero music.

Recorded in Fleet, UK, in the summer of 1978, originally released Suprerbun Tapes as a limited edition of about 10. This has kindly been licenced to Year Zero Records from Stupid Rabbit Tapes. Home of the mighty DIY Punk combo,Controls.

I'll leave you in the hands of Keine Namen guitarist and vocalist, Tim Naylor,(later bass player in Controls) to explain himself further:

"KN were Dave Mallins drums and me on guitar and voice with occasional member Nevil Ede contributing to these tracks.
None of us could play a note as will become immediately obvious.  I brought a guitar mainly to pose around Fleet with, because just being a punk had lost its gosh-wow factor and I thought ramping it up to 'being in a punk band' was the next step.  Dave decided to buy a drum kit and lo a band was born.  I wrote some lyrics and we spent the summer of 78 thrashing away in the garage of Dave's house as his parents were away in Ireland for three weeks.  A party was held at the house most evenings and eventually we graduated to playing a 'gig' at one of these parties.After Dave's parents returned (some kind of Catholic road trip) Dave's kit was wet when we went into the garage to rehearse... I was accused of gobbing on it. .. it was actually his mum spraying it with Holy water!  Late in the summer we decided to record the handful of songs we had (all bar one about the sisters Dave and I had been dating - the other one being about the same girl we both dated!).  We chucked in an instrumental 'cover' of Buzzcocks Sixteen and a loose interpretation of PIL's 'Theme'.  Nevil - who also could not play guitar - came and 'helped'.  A final track 'White Cars' was recorded by me solo back at my mums flat.I (Tim) designed the cover and packaged the tape up as 'Superbun Tapes No1' (Superbun was  cartoon strip I drew when I was 14) and ran off some copies.  Ten copies were handed out to the band and hangers on."